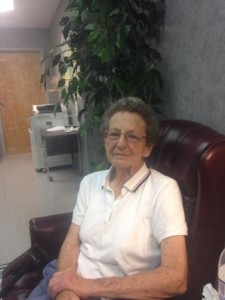 Some Information About Francis Dawson

Francis Dawson, formerly Francis Gregson, has lived in our Town for 44 years. She had lived with her Grandparents until she married Winston Dawson in January of 1952. Francis, now at 80 years old, is a strong woman who developed her strength througout life. That strenght has served her well and was needed, because her Husband passed away when she was just 30 years old, leaving her with 4 children to care for and raise.
People in Bono know Francis for her reputation as a great cook. Cooking is the way Francis serves her neighbors and loved ones, as well as those in need. Her passion for cooking cakes, cookies, Mexican food, and just about anything you can eat, has endeared her to many people in Bono. You won’t have to look very far to find someone in Bono who has been a reciepient of one of her delicious Rum cakes or any number of other specialties.
Being outspoken is another one of Francis’ traits. You don’t have to wonder very long what she is thinking, because good or bad, she will let you know. She says, “I have a great deal of respect for our Mayor because of what he has accomplished since he has been in office”. You had better believe that if she saw wrongs going on in the Mayor’s office she would be the first one to go and point it out. She and Aneda Clark, our City Clerk, are very close as well. Aneda thinks of Francis as a second Mother and a wonderful lady.
Francis has hopes that Bono will continue to do well. She would love to see some wider streets with sidewalks so walking would be safer. She also hopes we can get a good grocery store with lower prices and a better park for our kids.