Some Information About John Owens

As you enter the 12 foot by 16 foot storage building behind the house on Elizabeth Street in Bono, the first word that comes to mind is “organized”. There are several woodworking machines, a work bench, and various sized pieces of wood all fitted neatly into just the right amount of space, and no space is wasted. “Patience”, is another word and that is what John Owens says it takes plenty of to build guitars. It all started about 6 years ago when John ordered a set of plans for a Dreadnought guitar and another set for a Les Paul electric guitar. John had never done woodworking as a hobby, so he learned every technique as he progressed on building his first guitar from a set of plans. As he worked, he thought of ways he would like to do things a little differently and maybe other kinds of wood he might like to try. That was about 30 guitars ago and John is more excited about, and proud of his avocation than ever before. John says that he set out to build 5 guitars, one for him, his wife Angie, and one for each of their 3 children. When you do something like this and it’s good, people have a way of talking you into building one for them too.
Every one of John’s guitars is a work of art, because he makes sure that every square inch is as perfect as it can be before he goes any further. John laminates several pieces of wood to make various components of each guitar. Two common themes in every guitar is that every one has a piece of “Bono” wood in it and every one has a picture of John’s Daughter, Serena, inside on the label. John has saved wood from “Bono” trees which were damaged in storms. He has Ash wood and Cherry wood that came from his and his Dad’s yard. This is just some of the wood he incorporates into his guitars. The guitars are not just a beautiful thing to look at, but they sound great as well. John has several friends who are phemenol players who play his guitars and give him feedback as to likes and dislikes, because John is constantly trying to improve his product. John hopes to hear one of his guitars being played on the radio one day, that, he says, would be the ultimate complement.
John Owens works for Trane Air Conditioning and manages two supply stores, one in Jonesboro and one in Jackson Tennessee. His wife,Angie, is the president of the local chapter of the Nashville Songwiriters Association. I plan on doing a story on her for the web site sometime in the future. 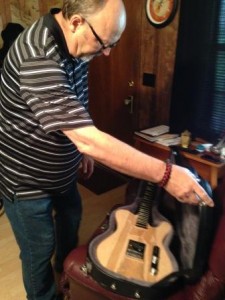