The city of Bono, Arkansas was originally known has Bonnerville. Its location was established when the Kansas City, Fort Scott, and Memphis Railroad began operation in Craighead County in 1883. The railroad wanted to establish a depot to serve the local community.
The original founder of the town was an early settler and wealthy farmer by the name of Mr. Alfred Bonner. Mr. Bonner offered to donate land for the railroad station and post office if in return the town was named after him. With the land donated the Bonnerville post office was opened and began operation unofficially October 4, 1883, but operation was discontinued on February 5, 1884 after the application to establish the post office was denied by the postal authorities in Washington D.C. The application was denied because the authorities felt that the name Bonnerville could be easily confused with the names Banner and Booneville, two towns already established in Arkansas. When the postal authorities recommended changing of the name the residents held a contest and chose the name Bono. The name was approved and the Bono post office was established on November 20, 1884, with James M. Fisher as postmaster. The city of Bono was later incorporated on July 12, 1916. 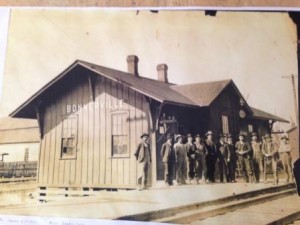